So… for this assignment I am building on the diverse methods of using the Makey Makey. The Makey has the ability to engage my students because of its none traditional interface to a computer. The project is a demonstration of how acceleration appears when it is graphed or shown graphically. Students are often asked to approximate this using stop watches  and recording the times after multiple drops past successively more distant points. While this does work I wanted my students to be able to picture this a little differently.

The final project is the result of several tried methods… Scratch is limited as to how to adapt sensors, but one that is available is

to track the movement of the car down the track. Well, that ended up too complex. My students didn’t understand what was going on and that took the project out of the learning arena.

The method I settled on is a series of “maker special” switches on one site of the track and the common terminal (the track) on the other. When the ball rolls along the track the Makey sees this as successive key presses. I then used code similar to the “Flappy Bird’s” tendency to rise to the rate of a key-press and fall when not receiving a key-press.

I’m happy with the final deliverable. While it is not a calibrated tool it is easy to make… the students had a good time and were anxious to work with it. I consider this one a success.

You can find a more detailed explanation in the project description below.

Acceleration is the rate of change of velocity per unit of time. With Makey-Makey and Scratch students will be able to view the acceleration of a metal ball as it rolls along the length of a conductive aluminum track. Students will created a track for tracking the rate against time using some maker special switches.

View acceleration on a graph

Measure slope and the effect it has on acceleration/rate.

Hooking up Makey Makey to Track

Use the Makey-Makey to visualize acceleration using a steel ball. Students will use this Scratch game  (or create their own game) to record a drawing of the acceleration of the ball over a given distance.

Set up rail for the metal ball according to the drawing below. 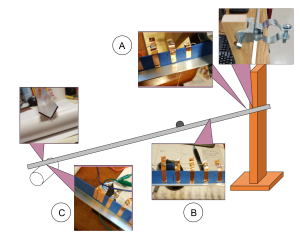 Construct the switches by running a strip of masking tape along the full length of one side of the track being certain to cover the inside and outside for insulation. Placing foil tape strips along the length of the track 2cm apart for 75cm. (as seen in the picture below) All of these will be connected together so that as the ball roles along the track the Makey sees multiple key presses. 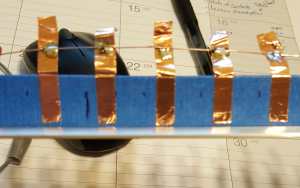 Add a strip at the beginning and the end that will be used to start and stop the program. 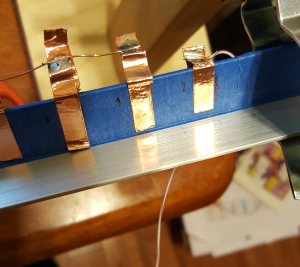 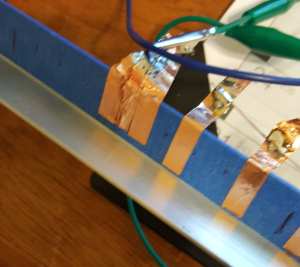 Convert rate from mm per millisecond to mph.

Create a word problem based on this experiment.

Use a Hot Wheels type car to recreate the experiment. (will need to change the style of track extrusion.

Add friction to the track with strips of double stick tape or adhere sections of paper to the track.

CCSS.MATH.CONTENT.HSN.VM.A.3: Solve problems involving velocity and other quantities that can be represented by vectors.